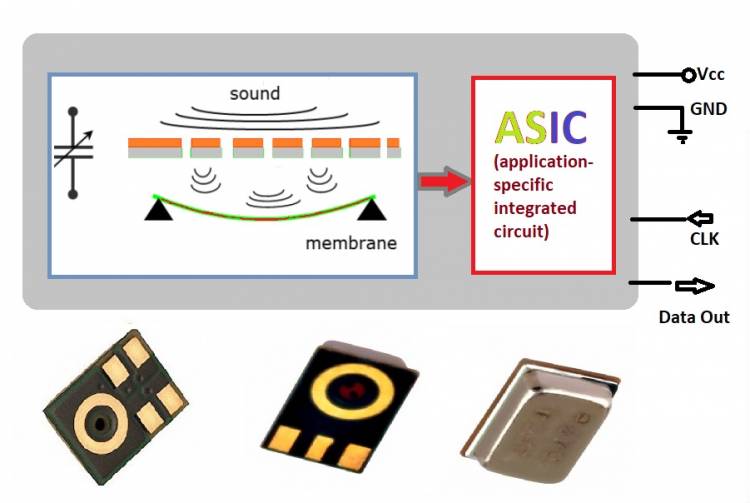 What is a MEMS microphone?

A MEMS microphone consists of a very thin diaphragm and a backplate.
The diaphragm moves due to the pressure created by the sound waves.
When the diaphragm moves, it creates a change in capacitance between the diaphragm and backplate, which creates a voltage difference.
This voltage difference is converted into an electronic signal, which can then be amplified or sent to be recorded as audio input.
A MEMS microphone is a very small device that converts sound waves into electrical signals using the piezoelectric effect.

These microphones make use of MEMS technology (micro-electromechanical system). MEMS microphones can be machined in sizes smaller than 3 x 2 x 1 mm.

Most MEMS microphones consist of a pressure sensitive diaphragm etched directly into the silicone. They usually have an integrated (ASIC) preamp and usually contain an ADC that converts analog audio to digital data stream. Although MEMS microphones have been primarily condenser types since they were invented, piezoelectric models are now available as well.

What's the Difference Between Bluetooth 4.0 and Bluetooth 5.0?

How is the Frequency Divided?

Scientific Developments in the Field of Energy

What is Smart Switch?

How to Make a Metal Detector?