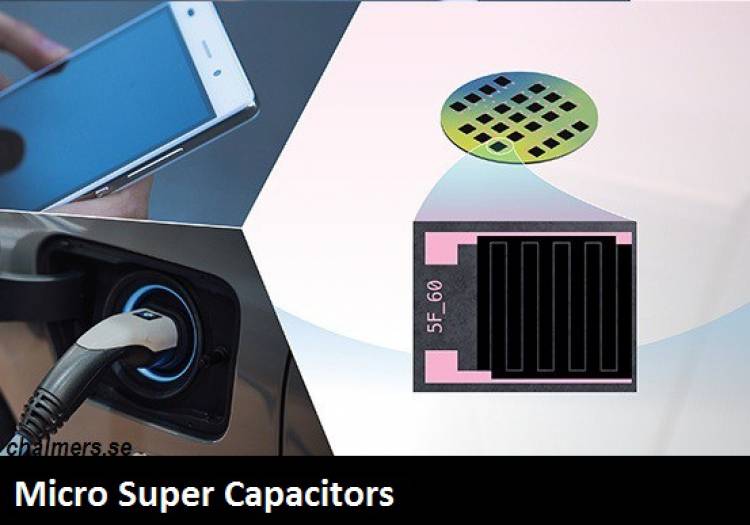 With minimal supercapacitors, service life can be increased and charging time shortened for batteries in telephones and electric cars, among other things. The image shows a 5.08 cm diameter silicon wafer with integrated micro supercapacitors, fabricated according to the CMOS compatible process developed by researchers at Chalmers. The plate can be scaled up to 20.32 cm in diameter to accommodate more supercapacitors.
Tiny supercapacitors could revolutionize the way we use batteries, extending the lifespan of batteries and providing fast charging in seconds. That's why manufacturers of everything from smartphones to electric cars are investing heavily in new electronic components. Now, researchers at Chalmers have developed a method that marks a breakthrough in how such supercapacitors can be manufactured.
Supercapacitors consist of two electrical conductors separated by an insulating layer. They can store electrical energy and have many positive features compared to a normal battery; they can be charged much faster, dissipate stored energy more efficiently, and can be charged and discharged thousands of times without degrading performance. When a supercapacitor is combined with a battery in an electrically powered product, battery life can be extended many times over. For example, the battery life of an electric vehicle can be up to four times longer. And whether for applications in private consumption or industrial applications, the benefits for the end consumer will be huge.
By using the electrode material called spin coating, which is the cornerstone of many manufacturing processes, we can choose the electrode material. Agin Vyas says we also show that the use of alkylamine chains in reduced graphene oxide leads to higher charge and storage capacity.
https://www.chalmers.se/sv/institutioner/mc2/nyheter/Sidor/Genombrott-for-method-som-kan-oka-batteriers-livslangd-och-laddningsformaga.aspx